In 1873, the population of Cap-de-la-Madeleine is approximately 1,300 inhabitants. The parish church can’t contain the parishioners who are becoming more and more present.

A new church must be built. But the people are poor and Cap-de-la-Madeleine’s sandy soil contains no stone. For economic reasons, it is therefore planned to demolish the old church (today’s Old Shrine) and use the stones in the construction of the new one. The rest of the necessary stones will be taken on the south shore, in Sainte-Angèle, opposite Cap-de-la-Madeleine.

Years go by without the project taking shape. It was not until the late 1870’s that the wardens had stone prepared on the south shore to be transported later on the Saint Lawrence River.

The time has come to carry the stone : winter 1878-1879. The winter is very mild. So much so that the the river does not freeze. The parishioners turn to the Virgin Mary. Every Sunday, the Rosary is said in order to ask for an ice bridge on the river. Months go by, January, February … We are at the beginning of March. Still no solid ice … People stand firm in prayer. Father Luc Désilets then promises the Blessed Virgin to consecrate the small church to her if the stone can be carried over in order to begin the construction.

It is only during the evening of March 16th that a trail of ice forms from one shore to the other (a distance of about two kilometers). From March 19th to the 25th, the stone is moved by a hundred cars pulled by horses. The people themselves who carried the stone on this bridge of ice, named it the « Rosary Bridge ». They were certain that this bridge was Mary’s answer to their prayer. The construction began the following summer and the new Saint Marie Madeleine church was blessed in October 1880, by Mgr Louis-François Laflèche, Bishop of Trois-Rivières. The old church was thus spared : the Virgin Mary had plans for it. But for now, it was just a ordinary parish. There is no mention of a shrine.

The Prodigy of the Eyes

The Prodigy of the Eyes is the second « founding event » of the Our Lady of the Cape Shrine. The first being the Ice Bridge.

The old parish church becomes a shrine decicated to the Virgin Mary.

Once the construction of the new temple completed, the old little church is vacant. Father Luc Désilets can now fulfill his promise by dedicating it to the Virgin Mary. The ceremony will take place on June 22nd 1888. This date is to be remembered : it marks the beginning of the Our Lady of the Cape Shrine. Father Frederic, a Franciscan (Bx Frederick Jansoone), participates in the celebration and gives the sermon. He uses « prophetic » words : « From this day on, this will be Mary’s Shrine. Pilgrims from all parish families will come, from all the diocese families and from all Canada’s dioceses. »

Until then, the statue of the Blessed Virgin had been in the side chapel of the little church. After the June 22nd celebration, the statue was placed above the high altar, where it still is. The old Saint Mary Magdalene parish church officially became the Our Lady of the Holy Rosary. That was the name of the Virgin honored in Cap-de-la-Madeleine.

On that same day of June 22nd 1888, at about 7 o’clock in the evening, three men entered into the little church, newly dedicated to the Virgin of the Rosary. .As they prayer before the communion table, something extraordinary happened. Father Frederick spoke about the event : « The statue of the Virgin, whose eyes are entirely lowered, had eyes wide opened; the gaze of the Virgin was fixed; she looked straight ahead. The illusion was difficult : her face was bright because of the sun shining through a window and lighting up the whole church. Her eyes were black, well-formed and in perfect harmony with her face. The Virgin’s eyes were those of a living person : there was an expression of severity mixed with sadness. This prodigy lasted between five and ten minutes.

«  The statue of the Virgin, whose eyes were always completely lowered, had eyes wide opened ». 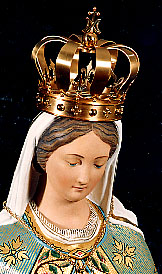 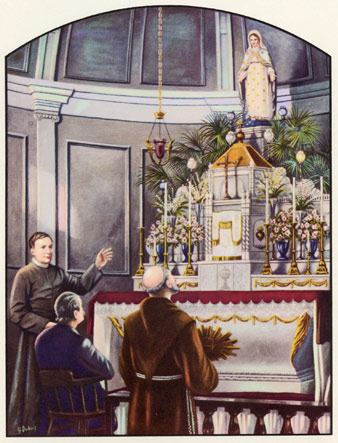 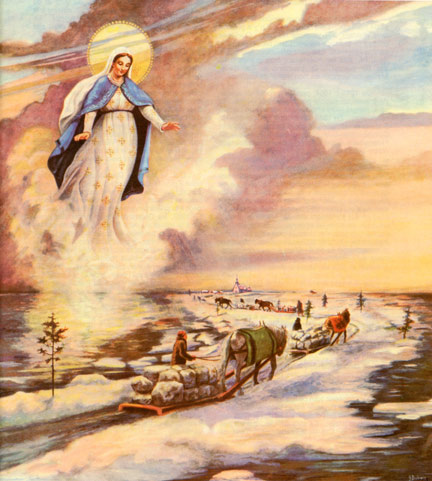 On the right, the 1st stone church (today's Old Shrine) 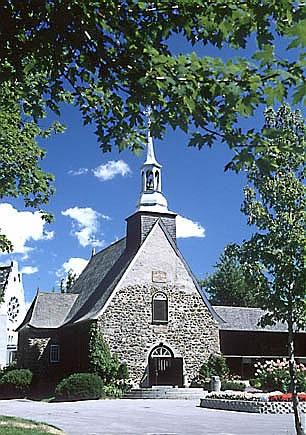 The church built with the stone carried on the Bridge of Ice in 1879. It was torn down in 1963 to clear the forecourt of the Basilica.