The Basilica rest on 195 foundation piles driven through sand and clay, to reach solid rock at about 27.5 m (90 ft) deep.

The white granite of the walls comes from Saint-Gerard (Wolfe). The copper of the roof changes color in the long run. The moist air covers it with verdigris.

The stylized replica of the statue of Our Lady of the Cape on the facade is the work of Paul Gingras. It is 7.3 m (24 ft) high.

The cornerstone is at the front of the Basilica, at the top of the steps, on the left. The four polished stones embedded in the shape of a cross were among the stones transported on the Ice Bridge in March 1879. They were blessed in Rome by Pope Pius XII.

The belfry houses 5 bells giving out the notes : re, fa, sol, la and B flat.

When entering the Basilica, one is impressed by the volume of the nave and by the harmony of its proportions. One can see everywhere : no columns or pillars to hinder the view of the 1660 people who can take place in the pews.

The framework is formed of large arches of reinforced concrete consisting of oblique straight lines (polygonal arcs) which fall on pillars at the angles of the octagon. The buttresses which are located between le pillars and the walls are pierced with a high opening allowing circulation around the nave.

In the design of the great arches, the choir and the transepts, the architect Adrien Dufresne was obviously inspired by his mentor, Dom Bellot, a Benedictine monk. The arches of the choir and transepts somewhat resemble the angles formed by the phalanges of the fingers when they are folded. It is there, it seems, that Dom Bellot would have gotten his inspiration for the polygonal arches.

The inner dome surrounded by triangular windows forms a large golden rim with a diameter of 14.5 m (48 ft).

On the front of the altar is a mosaic inspired by the Apocalypse : the Lamb and the Book with Seven Seals. The lamb bears the cross : it is the symbol of Christ victorious over death present on the altar when celebrating the Eucharist.

The Our Lady of the Cape Statue

Stylized replica of the « miraculous » statue found in the Old Shrine. It is made of Carrara marble and is the work of Petrucci from Montreal.

The Shrine buildings and gardens are accessible to people with reduced mobility. 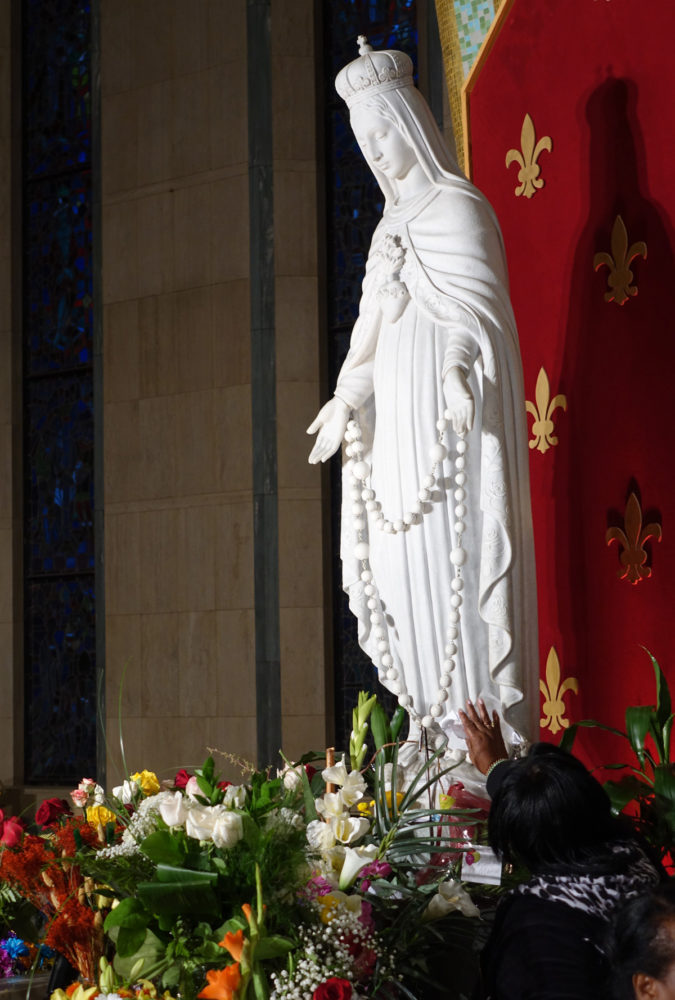